1. Playing with dimensions - which tool to pick...

We have seen many times, at this point, instances of biological datasets that are multi-dimensional. With RNA-seq data, specifically, we expect to be operating with numerous samples (e.g. single cells, tissue samples etc), each of which has several thousands of genes whose expression we would like to probe. These kinds of experiments give us \(N \times M\)-dimensional matrices, where \(N\) is the number of samples, and \(M\) is the number of genes, or, equivalently, the dimensionality of the space in which each sample resides. This picture is further complicated if we decide to assess other parameters - e.g. the biological sex of the specimen, WT vs mutant variation, or different experimental conditions. One of the ways to make sense of such data - and visualize the results - is to recast it in a fewer number of dimensions, most frequently in 2D.

As Sean outlined in the lecture, there are many approaches to dimensionality reduction, and one of them we covered last week - principal components analysis (PCA). PCA proved to be very powerful on Watson's dataset, yielding nice clustering of cells that reproduced true biological subtypes. In that case, there were only 2 PCs that contributed in a significant way to the variance of the data, so we were able to denoise the data and plot it in 2 dimensions.

Here is an illustration (that you might have seen before) that summarizes this process for a 3D dataset:

We can imagine scenarios, however, where PCA would fail to identify clusters correctly - for instance, if there were more than 2 PCs with significant variances.

Thinking of this problem in geometric terms, we would expect to encounter issues with PCA if we had an extra cluster of cells above the "plane" of maximum variance in which the remaining clusters can be best separated (as in Figure 1). If we were to project this modified dataset into 2D, we'd end up with considerable overlap between clusters that, in reality, are distinct.

t-SNE (t-Distributed Stochastic Neighbor Embedding) becomes particularly useful, since it does not rely on global structure to embed points into 2D, but rather on their local structure.

Here is the result of t-SNE analysis (Figure 3) of the original structure shown above with perplexity = 30.

Very beautiful! These illustrations are taken from the article that Sean references in his lecture notes. I highly recommend going online and playing with their examples - they helped me develop some intuition for how to interpret t-SNE plots.

2. Review the conceptual basis for t-SNE

t-SNE belongs to a family of nearest neighbor algorithms (see my favorite source Wiki for more) and captures local structure by defining neighbor relationships between the high-dimensional points in the dataset.

For each point \(i\) which resides in \(M\)-dimensional space with coordinates {\(x_{i1}...x_{im}\)}, we can draw a spherical gaussian, speficied by a variance \(\sigma_i\), which will define the probability that any point \(j\) in the vicinity is its neighbor.

The euclidean distance between the two points is given by

Note: We do not choose this value; it is given to us by the input data and never changes.

The conditional probability that \(j\) is \(i\)'s neighbor is

You can think of \(d_{ij}\) as an intrinsic quality of the data, and \(\sigma_i\) as a choice we make about how many neighbors we want our points to have. Loosely speaking, even if a potential neighbor is "far away", we can still make them a neighbor by increasing \(\sigma_i\); conversely, even if a potential neighbor is "pretty close", we can still make them an outsider by decreasing \(\sigma_i\). \(\sigma_i\) is kind of like point i's "extraversion" in the parlance of the Big 5 personality traits. We'll do this more formally in a bit.

Finally, for our final t-SNE computations, we calculate

As expected, the larger the chosen value of sigma, the greater the number of points that that will fall within the sphere and be counted as "neighbors". Conversely, the farther the point is from the center of the Gaussian, the less likely it is to be a neighbor.

In t-SNE, we choose sigma values for each point such that the perplexity, which we can think of as the effective number of neighbors, is the same for all points. As a result, for points that are within a densely populated clusters, the sigma will be small, shrinking their spherical gaussians, whereas for points in sparse regions, the sigma will be larger to capture the desired neighbors.

Question: What does that tell us about intepreting cluster sizes in t-SNE?

Question: What about inter-cluster distances?

Thus, we can describe the original M-dimensional space of our N samples by an \(N \times N\) matrix of conditions probabilities that define all the inter-point relationships.

The point of t-SNE, in layman's terms, is then to find a 2D representation that would capture as closely as possible these relationships.

What do we mean by this mathematically?

We would like to find such coordinates {\({y_1...y_N}\)} in 2D space that the probabity distribution function \(Q_{ij}\) that describes the relationship of all the points in this 2-dimensional space matches as closely as possible the original M-dimensional \(P_{ij}\).

Note: The difference in this t-SNE \(q_{ij}\) vs. the SNE \(q_{ij}\) is that the t-SNE version assumes a heavy-tailed distribution, alleviating the "crowding problem" endemic in SNE by assigning higher weights to points further away.

We can quantify the degree of similarity (or, rather difference) between these two probabilities with the so-called Kullback-Leibler divergence:

Note: \(D_{KL}(P||Q)\) will always be positive. You can take my word for it, or read about the Kraft-McMillan inequality and convince yourself.

Our goal, therefore, is to find optimals parameters \({y_1...y_N}\) that minimize the Kullback-Leibler divergence.

We have tackled a number of optimization problems before, so, conceptually, we should be all set to take on this one. The hurdle in this particular case is setting up all the inputs to pass on to the optimizer. Just to be explicit, there are two separate optimization steps in t-SNE: 1) Choose \(\sigma_i\)'s to achieve desired perplexity and 2) Choose 2D embeddings to minimize \(D_{KL}(P||Q)\).

So let's talk about how to do that.

3. * The gruesome details* - setting up input for optimize.minimize

The target matrix is \(P_{ij}\), an \(N\times N\) matrix that we will generate from the observed counts.

The distance matrix should be relatively straightforward. I would create a separate function and precalculate the matrix so that I can use it as input for later functions.

Calculating sigma for each point \(i\) is a little bit more involved. As Sean outlined in the lecture notes, we can easily determine the value of a perplexity, given a sigma. The Shannon entropy is given by:

And perplexity is just

However, we would like to carry out the reverse process - given a perplexity value, find a sigma that satisfies it, and for that purpose, we will turn to scipy.optimize.bisect().

The basic idea behind this is that we can recast the problem of finding a sigma as a root-finding problem where we find a sigma such that \(f(\sigma) = 0\) by passing our function to scipy.optimize.bisect().

We can then pass on that difference to scipy.optimize.bisect() specifying boundary values (a,b), and making sure that the \(D_i\) array is flattened.

A brief interlude on how to use scipy.optimize.bisect()

Just to give you a hint, here is how you would do that for an analogous problem - finding the root of equation

Let's imagine that I did not google this equation and did not look at the plot of the function, so that I don't have a good guess for the upper and lower bounds. What I do know, however, is that

So I can make a reasonable guess for the upper and lower bounds, and apply the principles I outlined above to find the root of this equation!

Let's check that we got the right answer:

OK, now that we know how to obtain sigma values for all of our points, we are ready to set up the \(P_{ij}\) matrix.

We know that this matrix is the average of conditional probability matrices:

Since we assume that all points are equiprobable, i.e.

The equation simplifies to

So I'd first set up a function to calculate conditional probabilities, and then combine them to give the final symmetric probability distribution.

Just as a reminder,

Finally, compute the symmetrized \(P_{ji}\) given the two conditional probabilities. Phew, we're done with the initial set up!

We will do that for each independent run of the scipy.optimize.minimize routine.

The final piece is calculating the KL divergence (that we will use to monitor the convergence of the algorithm) and the gradient, which we have to pass on to scipy.optimize.minimize.

Sean recommended combining calculations of the KL divergence and the gradient, since they both involve calculating the \(Q_{ij}\) matrix, and it's nice not to have to do it twice.

At this point, you should be all set to carry out t-SNE analysis on the dataset. Make sure to run the analysis multiple times from random starting positions, because t-SNE, as Sean talked about in the lecture, is prone to getting stuck in local minima!

Which parameters (aka perplexity values) to test on each of the datasets?

What do you expect your plots to look like for different perplexity values?

Let's run t-SNE on previous week's dataset, and see how the algorithm does. Painful to see this one-liner and to think of the hours that will have to be spent to implement what already exists, isn't it?

Let's console ourselves with the thought that maybe we'll learn something useful in the process.

Now let's plot the results of t-SNE analysis for different perplexity values and coloring the points by their "true" clusters.

Hmm, this is clearly a difficult dataset for t-SNE. There is a perplexity value ~ 100, however, at which it seems to do relatively reasonably. Interestingly, above and below this value the prediction looks quite terrible. The outcome of the analysis is clearly very sensitive to the chosen perplexity value... We might have thought, perhaps naively, that the optimal perplexity value would be in the same range as as the approximate size of the cluster: in our case, ~200/8 = 25 ish. However, perplexity values 10-50 result in sub-optimal separation, and we see better separation at 100.

OK, let's investigate one other property of t-SNE analysis - and that is the relationship between true cluster sizes and inter-cluster distances, and the t-SNE output.

For that purpose, we can choose a simpler dataset (our 2D test dataset from HW5), where we know that cells cluster nicely in log-log space.

Remembering what the true clusters look like in log-log space (this figure is taken directly from your HW5), what can we say about t-SNE's ability to reproduce true cluster sizes and inter-cluster distances? 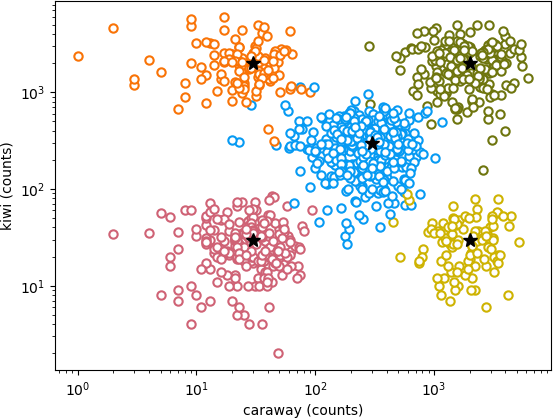